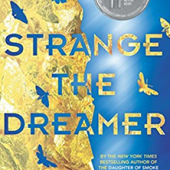 The dream chooses the dreamer, not the other way around–and Lazlo Strange, war orphan and junior librarian, has always feared that his dream chose poorly. Since he was five years old, he’s been obsessed with the mythic lost city of Weep, but it would take someone bolder than he to cross half the world in search of it. Then a stunning opportunity presents itself, in the form of a hero called the Godslayer and a band of legendary warriors, and he has to seize his chance or lose his dream forever.
What happened in Weep two hundred years ago to cut it off from the rest of the world? And who is the blue-skinned goddess who appears in Lazlo’s dreams?
My Review
This was a fascinating book. Full of mystery and surprise, I was captivated by the story.
Lazlo Strange is such an engaging character. He is smart, loyal, and, in the end, not anything you expect him to be.
I also loved Sarai. At first when the point of view shifted to her world above the city of Weep, I was actually annoyed because I was so into Lazlo’s story I resented the fact that I was being wrenched from his mind and thrown into that of a godspawn. It took some time before Sarai grew on me but soon I was just as engaged with her story as I was with Lazlo’s and particularly so when their worlds collide.
Having said that, I found the romance of the book a bit over the top. I love a good romance but in this book I found it a bit distracting from the overall story.
Strongly recommend this one from Laini Taylor!
Buylink: https://www.amazon.ca/Strange-Dreamer-Laini-Taylor/dp/0316341681/
Share