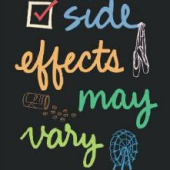 The Fault in Our Stars meets Sarah Dessen in this lyrical novel about a girl with cancer who creates a take-no-prisoners bucket list that sets off a war at school—only to discover she’s gone into remission.

When sixteen-year-old Alice is diagnosed with leukemia, she vows to spend her final months righting wrongs. So she convinces her best friend to help her with a crazy bucket list that’s as much about revenge as it is about hope. But just when Alice’s scores are settled, she goes into remission, and now she must face the consequences of all she’s said and done.

Side Effects May Vary is written in third person and switches point of view between the two main characters, Alice & Charlie. In addition to this, it moves back and forth through time. Unlike many books that follow this model, I found that this was NOT at all confusing in this book. In fact, it worked!

Even so this book was very difficult for me. I found the main character, Alice, extremely hard to like. It would not be an exaggeration to say I hated her. I didn’t understand her motives or her goals. I didn’t feel sympathy for her. I just didn’t like her.

Charlie, the main male character in the book, and Alice’s steadfast friend despite the fact that, for the most part, she’s a self-centered brat, is easier to like. But his devotion to Alice and his angst over her is equally as frustrating as Alice’s personality.

My big criticism of this book is Alice’s inability to admit that she is in love with Charlie. While this is a believable plotline for some characters, for Alice there is absolutely no reason in her background that would suggest that she has been so traumatized as to be unable to love or to admit that she’s in love. She is raised as a beloved only child, who seems to have fairly normal relationships with both her parents (there is tension between her mother and herself but not enough to warrant her being so broken when it comes to the romance department). With no understandable reason for not being a normal teenager (no horrible past relationships where she’s been irrevocably hurt, no childhood traumas … nothing) I struggled for most of this book to find something to like about Alice.

In the end, this book evoked such strong emotions from me, I left with admitting that it had to be a good book. Whether you love or hate something, when it drives you nuts while reading it, it must be a good read.