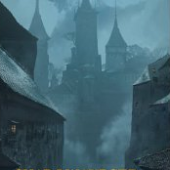 Bolen is a thief, plying his trade under the spires of an ancient and sprawling city. Worried that he’s growing too old, Bolen has lined up a risky job, just to prove that he can still pull one off.

Tonight, he’s going to break into a nobleman’s vault and help himself to its contents. What he doesn’t know is that inside is the key to a secret as old as the city itself.
Kings have killed for it, demons have coveted it, priests have prayed for it, and in a few moments it will be in his hands. And when it is, the adventure of his life will begin.
Amazon Link: http://www.amazon.com/Shadowcursed-ebook/dp/B00BYEW02M
Link to Cover Image: http://2.bp.blogspot.com/-jA1_hALWD7Q/UUz_n8LOs9I/AAAAAAAAAMY/jaiWCfUywUo/s1600/WebsiteCover.JPG
Link to the companion game: http://gfleisher.blogspot.com/2013/10/some-screenshots-of-requiem.html
My Review
I enjoyed Shawdowcursed very much. The fact that it was a novella was appealing to me because I’ve been reading quite long books lately and sometimes a shorter read is nice.
As to be expected with a novella, Shadowcursed is a fast paced read. Its emphasis is on action rather than character development. While the main character, Bolen, is likeable, the reader doesn’t get a lot of back story from him. For me as a reader, in this particular book, this worked. I’m a big character reader so the fact that I was engaged enough to keep reading the book says a lot in itself.
There is a free companion game that goes along with the book and Fleisher is a game developer. If you’re a gamer, I think this story will really appeal to you. I could definitely see how it would be make a great plotline for a game.
When I read books like this, I think of whether my 13-year old son will like them and I think Matt would definitely enjoy Shadowcursed. If you like a fast paced, action adventure then this is a book you should definitely check out!
Share

Reading Level: Ages 12 and up, Middle School to Adult
Back to Reviews