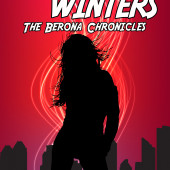 Welcome to the city of Berona – a city governed by four Superheroes with great superpowers. Thanks to the Superheroes, Berona is mostly crime-free, and is touted as one of the best cities in the world. However, there are some people who aren’t so sure about Berona’s greatness…  Meet Terry Landers – a genius inventor who can create anything out of nothing. But Terry knows that she’s unpleasant and rude. which is why she’s surprised when she’s asked to become a Superhero’s sidekick. Terry is one of the few people who questions the wisdom of having the Superheroes govern Berona, and as she dives into her new role as a Superhero sidekick, she begins to realize just how right she might be.  Throw in a child kidnapping and evidence that links the crime to the Superheroes, it’s now up to Terry to save her beloved city. But will she be able to fulfill her duties as a sidekick? Or will danger find her first?  Recommended for young adults, aged 16+, Scarlet Winters is a humorous book that pokes fun at comic book superheroes.

I received this book from the author in exchange for an honest review. I have to admit it took me a while to get to this book as my TBR pile is very large. I had my doubts about a superhero novel but it didn’t take more than a few pages for me to become hooked.

Terry Landers is a unique character who is hard not to love. As you follow her adventures with the Superheros, you can’t help finding yourself cheering for her success.

The plotline is filled with twists and turns but unlike many scifi books, Scarlet Winters has enough lighthearted humour in it to keep the reader amused AND entertained (sometimes a hard order to fill). By the end of the story I found myself cheering for Terry as she outsmarts almost everyone else in the book.

Review by Cathi Shaw
Series: The Berona Chronicles |
Back to Reviews