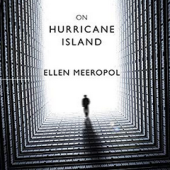 As a major hurricane threatens the northeast, math professor Gandalf Cohen is abducted by federal agents and flown to a secret interrogation center off the coast of Maine. Austin Coombs, a young local resident, is a newly hired civilian guard assigned to the detention center. Henry Ames, a man of personal secrets, is the FBI special agent in charge of Gandalf’s case and doubts the professor’s terrorist involvement; Tobias, his second-in-command, disagrees, preferring violent interrogation. As the hurricane slams the shore, conflict detonates and each character must choose a side if they’re to survive the storm.

Hurricane Island is the location of a detention centre in Maine, where US citizens suspected of terrorism are taken. As one of the largest hurricanes in recent history bears down on the island, a storm of another kind is taking place inside the facility.

I’m not usually a big suspense novel fan and I wasn’t sure about this novel when I started it. First, one of the main characters is a woman named Gandalf. I am a huge LOTR fan so I wasn’t really taken with the naming of the character but I went with it. This story is told from the POVs of several main characters. Meeropol does a good job of shifting between characters without disrupting the flow of the story. And the characters themselves are quite well developed, although at times stereotypical, particularly the male characters in the story (Henry Ames and evil Tobias).

The suspense and pacing of the novel are its greatest strengths. Meeropol has a intrinsic gift for knowing when to jump to another storyline and keep the reader engaged. This makes for a relatively fast read (or listen if you prefer the audiobook version of the novel, which I listened to). In addition, there is the mystery of Austin’s great-great grandmother. A family secret that is linked to old letters she steals and a hidden cave on Hurricane Island. While not directly involved with the main plot of the story, this subplot adding a richness and depth to the book.

I mentioned the stereotypical male characters already. The antagonist in the book, Tobias, is almost too evil. A man who is determined to climb the ladder of power, he also is obsessed with interrogation methods, torture, and at the same time is lusting after young Austin. While any one of those things could have made Tobias an effective “bad guy,” throwing them all into one character was a bit much. Henry Ames is more developed. While he hides a proclivity for women’s clothing and a suspected heart condition, overall he is a likeable character.

Without giving away any spoilers, I did find the climax of the story built well to a satisfying finale. However, the actual ending of the book seemed a bit abrupt. Perhaps it was the narration of the audiobook but I actually said aloud “Oh, that’s the end?”

Overall I would recommend this novel. I enjoyed the storyline and the characters and will be checking out more Ellen Meeropol novels in the future.