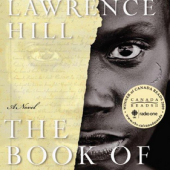 Abducted as an 11-year-old child from her village in West Africa and forced to walk for months to the sea in a coffle―a string of slaves― Aminata Diallo is sent to live as a slave in South Carolina. But years later, she forges her way to freedom, serving the British in the Revolutionary War and registering her name in the historic “Book of Negroes.” This book, an actual document, provides a short but immensely revealing record of freed Loyalist slaves who requested permission to leave the US for resettlement in Nova Scotia, only to find that the haven they sought was steeped in an oppression all of its own.

Aminata’s eventual return to Sierra Leone―passing ships carrying thousands of slaves bound for America―is an engrossing account of an obscure but important chapter in history that saw 1,200 former slaves embark on a harrowing back-to-Africa odyssey. Lawrence Hill is a master at transforming the neglected corners of history into brilliant imaginings, as engaging and revealing as only the best historical fiction can be. A sweeping story that transports the reader from a tribal African village to a plantation in the southern United States, from the teeming Halifax docks to the manor houses of London, The Book of Negroes introduces one of the strongest female characters in recent Canadian fiction, one who cuts a swath through a world hostile to her colour and her sex.

I’m ashamed to say that this amazing book has been sitting untouched on my shelf for a few years now! For some reason I just could not motivate myself to pick it up (and not because it was a massive tome or the language was inaccessible). But this summer it was one of the first books on my reading list and I can’t believe it took me so long to discover it.

From the first page I was hooked on Aminata’s story. I could not put it down once I started to read this book. The tale Hill weaves about this amazing character is riveting. The reader travels from Africa to America to Canada back to Africa and finally to London, all through the eyes of Aminata. Hill’s ability to honestly portray the ongoing prejudice and abuse the main character faces is deeply touching.

The attention to historic detail and the ways in which the author carefully crafts this story to be as true to history as possible are inspiring. But the real strength of this novel is the character development. The main character is instantly likeable and becomes a real person to the reader by the end of her story. By the time one puts the book down, one can’t help but feel sad to say goodbye to Aminata.

This book is by far number one on my summer reading list. If you haven’t discovered it yet, be sure to check it out!