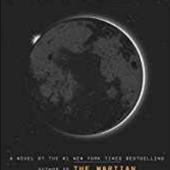 Jasmine Bashara never signed up to be a hero. She just wanted to get rich.

Not crazy, eccentric-billionaire rich, like many of the visitors to her hometown of Artemis, humanity’s first and only lunar colony. Just rich enough to move out of her coffin-sized apartment and eat something better than flavored algae. Rich enough to pay off a debt she’s owed for a long time.

So when a chance at a huge score finally comes her way, Jazz can’t say no. Sure, it requires her to graduate from small-time smuggler to full-on criminal mastermind. And it calls for a particular combination of cunning, technical skills, and large explosions—not to mention sheer brazen swagger. But Jazz has never run into a challenge her intellect can’t handle, and she figures she’s got the ‘swagger’ part down.

The trouble is, engineering the perfect crime is just the start of Jazz’s problems. Because her little heist is about to land her in the middle of a conspiracy for control of Artemis itself.

Trapped between competing forces, pursued by a killer and the law alike, even Jazz has to admit she’s in way over her head. She’ll have to hatch a truly spectacular scheme to have a chance at staying alive and saving her city.

Jazz is no hero, but she is a very good criminal.

That’ll have to do.

This book was phenomenal. I could not put it down. Fast-paced, with a wise-cracking protagonist who makes no apologies for her shortcomings, this is one awesome adventure.

As the summary says, the premise is that Artemis is a settlement on the moon. This book also reminded me of why I can’t write scifi – I’m just not smart enough (yes, you can quote me on that). Not only is the story full of adventure, it is also full of knowledge. And not snotty, I-know-more-than-you science facts. Jazz as the protagonist EXPLAINS the science to the reader but in a way that is interesting and necessary and makes good sense.

The other big plus of this novel for me was the diversity of characters within the story. Jazz is Saudi Arabian but has lived on the moon since she was 6. Her dad is devoutly Muslim. The major characters are from a variety of nationalities (from Brazilian to Eastern European to Kenyan). It was really refreshing to read a book that reflects my own worldview.