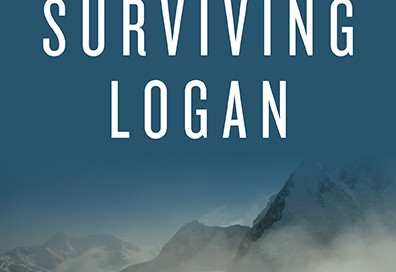 A lot of people have asked me about how I made the move from writing young adult fantasy novels to writing a mountaineering biography book. On the surface, I can see how this could be seen as a huge leap but I never really considered it one.

I am a writer and so I write. As a teacher of writing, I always look at the art from the view of genre theory. I write in a multitude of genres, based on my audience and purpose. This is true even with fiction and creative works (such as poetry and biography). But rather than getting into an academic dialogue here, I want to talk about the unique features of writing biography.

Erik is my cousin and I had always hoped to write the story of how he survived the events of May 2005 on Mount Logan. But it was such a personal story for him that I didn’t want to approach him about it. He had mentioned it in passing to me once but it wasn’t until 2014 (9 years after the tragedy on Logan) that he wrote to me and asked me to help him tell his story.

Erik had been sharing his story through presentations and talks almost from the beginning. But actually writing a book about his experiences would be a different kind of challenge. For Erik it would mean reliving the most minute details of the trip. For me it would mean finding a balance between Erik’s voice and recollections and actual facts of the trip.

I started research for the book as soon as Erik contacted me and we agree to work on the project together. Because I am a faculty member at UBC, I have access to the university databases, which include media reports and academic articles. The 2005 Logan Expedition had garnered much media covered, even before the storm hit and events went sideways for Erik. This was because it was a North Shore Rescue 40th Anniversary trip. The expedition brought attention to the volunteer activities of NSR and was a “feel good” story for the local papers. Of course, once tragedy struck on the mountain, it became a national news story. And later an academic article was published about the storm itself.

So I had a lot of facts gathered before Erik and I sat down for our first interview but I knew from experience that the core of the story had to come from Erik himself.

Because I have background as a qualitative researcher and have completed doctoral level work in interviewing, I knew how I wanted to conduct the interviews with Erik. I recorded all of them and transcribed the interviews into the initial draft of the novel. So the first drafts of the book were 100% from Erik’s own memories and in Erik’s own voice. As it turns out this was the best way to build a base for the book because it ensured that the final version of Surviving Logan would have Erik’s authentic voice.

I conducted multiple interviews with Erik. In the end there were hours of tape that I transcribed. Some of his recollections were foggy (as to be expected from such a traumatic experience) and some of the details were vague (different members of the team focused on different things) but I had the foundation of Erik’s story and from those interviews I wrote the first draft.

Erik read through each draft in detail and we had many, many long conversations about what needed to be added or changed in the book. It became apparent to both of us that I would need to sit down and talk to as many of the team members as I could. And that’s exactly what I did in February of 2015. I was able to meet most of the team members in person at least once (some of them several times) and talk to them about what happened on Logan in 2005. Those who were not available in person, responded by email.

These secondary interviews were very different than the interviews I did with Erik. First of all, they were very focused. I had questions that I wanted answered, holes in Erik’s story that needed to be filled and details that had to be fleshed out. There were some things the team members remembered differently than Erik did and other things that they all recollected in precisely the same manner. It was fascinating.

The multiple interviews, along with follow-up messages and phone calls, proved to be invaluable to the book. After we had completed those, the rewrites were finished relatively quickly.

The most challenging thing about writing this kind of book is translating the person’s real life experience into a story the readers can relate to. But early reviews tell me that we did a good job with Surviving Logan. Erik’s story is amazing! I hope readers will think so as well.

You can find Surviving Logan in Chapters Indigo and independent stores across Canada. It is also available to order through Amazon.ca, Amazon.com and Barnes and Noble

Leave a Reply to Chris Bjarnason